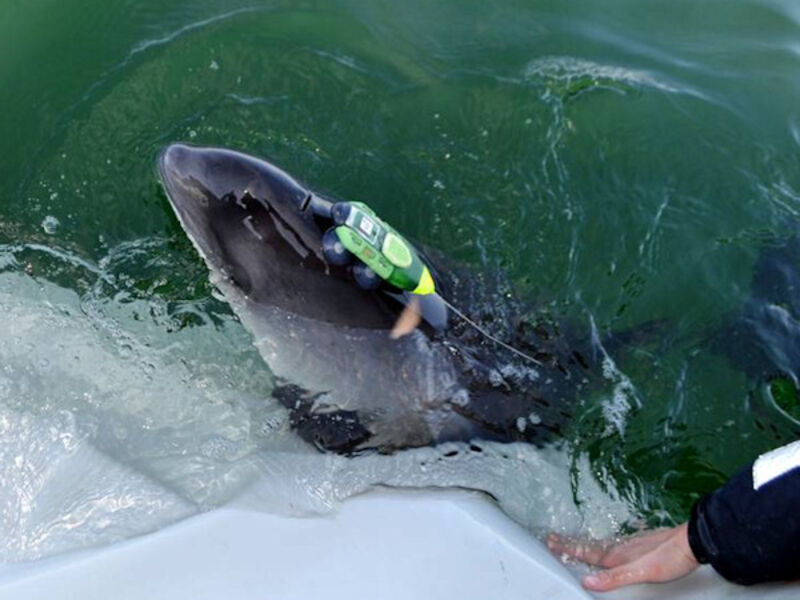 Does shipping affect the behaviour of porpoises? Among other things, this question was at the beginning of the project "Effects of underwater noise from offshore wind turbines on marine mammals", which is carried out in Danish coastal waters by an international research team, supported by the Federal Agency for Nature Conservation. Results of this research project were published by the scientists in the journal "Proceedings of the Royal Society B".

For the project, the researchers equipped seven porpoises with acoustic data loggers by attaching them to the animals with suction cups. Between about 12 and 24 hours, the devices recorded where the animals were, how deep they dived, what signals they were sending and receiving, what noise they were exposed to, when they were resting, and when they were hunting. The noise caused by ships is in the audible range for harbour porpoises. Based on the data gathered by the researchers with the data loggers, they were able to read that porpoises were exposed to the noise of ships about 17 to 89 percent of the recording time.

Porpoises orient themselves in the water via echolocation. They emit click sounds and gain information about their environment from the reflecting echo. With the help of this technique they communicate, navigate and forage for prey. During hunting, harbour porpoises increase the click rate to up to 500 signals per second. Given that, the researchers were able to determine from the collected data when the shipping traffic disturbed the animals during foraging. They found that the number of foraging attempts decreased by the shipping traffic.

Occasionally the researchers measured particularly high noise levels. Based on the navigation data, which commercial vessels have to transmit to the "automatic identification system AIS", they were able to trace back that this particularly high noise pollution is caused by fast ferries. The ferries sail faster than porpoises can swim. To avoid them, the animals dived deeper, increased swimming effort and interrupted their foraging activities during the vessel pass with one of them abandoning echolocation altogether. The encounter between the harbour porpoise and the ferry can be easily understood from this visualized acoustic recording: www.youtube.com/watch?v=Ohk3AkMImB8&t=7s

Ursula Siebert, director of the Institute of Terrestrial and Aquatic Wildlife Research at the University of Veterinary Medicine Hannover (TiHo), explains what these disturbances mean for harbour porpoises: "Mammals like harbour porpoises have to maintain their body temperature. Hence, they have an energetic metabolism and therefore need to feed frequently. If they will be disrupted during hunting, could that have an effect on the physical fitness."

The researchers collaborated with Danish fishermen for the project. They notified the researchers when a porpoise accidentally got into a pond net. The nets are very fine-meshed, so the porpoises cannot get tangled in it and drown. With these nets the researchers are able to get the animals out off the water. They are lifted up onboard of the fishing vessel, where they were measured and examined and equipped with a data logger. The whole procedure took no longer than 15 minutes.The project brings together researchers from Aarhus University in Denmark, St. Andrews University in Scotland and TiHo's Institute of Terrestrial and Aquatic Wildlife Research. The project was funded by the Federal Agency for Nature Conservation, the Carlsberg Foundation, the Danish Council for Research, Natural Sciences (FNU), the Marine Alliance for Science and Technology Scotland and a Marie Skłodowska-Curie Career Integration Grant.